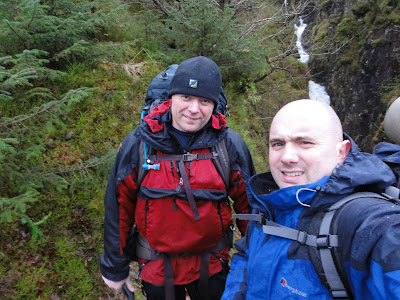 Me and Mr Murphy went on a wild camp that was doomed from the beginning, I had a few days off work so with that in mind we had planned to go away on Monday 3rd January, not much planning went into it just that we would go on that day so when it came along it was like ok where what time etc, quite rushed but we agreed on Pillar to wild camp on the top, sounded good so I planned the route with my new toy the satmap active 10 plus which was quite good, the route up was going to start from seathwaite and walk over to Pillar so plan A was sorted Sunday night came and David came up with plan B drive to Ennerdale park right at the bottom of Pillar walk up little more driving but much shorter walk, which sounded even better, so with the shorter walk to get to the top we thought plan B is the best so back to my toy and planned the route up, I noticed that it was still quite a walk so when Dave picked me up I told him of my find that the road  doesn't go to the bottom he told me that he had quickly looked at it and it was a road so off we went.

We got there JUST after Dave rallied around some very tight single lane roads ( I'm a very bad passenger) and found that Dave was actually right about the road but it was a no access road for us so now we had drove about an hour further with the same long walk, so heads down arses up we plodded on along the road which we so wanted to drive along and finally reaching the path up towards Pillar.

This path was like nothing I had seen before we actually walked past it at first and only realised when I checked the satmap and could see we had over shot it, bugger not far back and we spotted what I can only describe as a tight little path going up through the trees.

As we walked up the path following my satmap I was struggling to go much further weather was a treat and you could see for miles but it was getting dark and we decided we would just pitch our tents about 1500ft the side of pillar, we found a nice little spot next to a very good water source.

Little did we know we had actually pitched at a place called Windygap Cove and when I get around to a video you will see why its called that lol.  The weather was nice a little breeze which was picking up but very slowly, so tents up and just getting my sleeping bag lofted and I heard a cry of "arrrr no!!!!" from Dave I came out my tent to find that he couldn't find his stove, nightmare, after he looked and searched though his whole bag, I suggested he really only had 1 option and that was ditch the steak for a boil in the bag luckily I had 2, after another head scratch and search he found it in a dry bag, spirits were lifted again as now he could eat his steak and I could try both my new boil in the bag.

We put our foods to cook/warm and sipped black russian, commenting on how the sky always looked sweet from up high with all the stars out, the clouds that were forming soon blocked them out and I knew the met office was going to get tonight right.

A few hours had passed talking drinking and drooling over Dave's famous steak cooking, when we retired to our tents it didn't take long before it was lights out for me till about 12am when the weather turned really shit.

At 12am I awoke to find my tent once again slapping me in the face and a noise of flapping tent shit I thought I never drank enough, I tried my best to get back off but no ear plus or headphones I had to listen to the loudest tent flap I have ever had to listen too what a complete fucking nightmare to say the least. flap flap flap flap flap fucking flap.  It went on all through the night and the snow was coming down thick and fast at 3am Dave got out his tent to re-adjust his guy line and said the snow was hitting him that fast it felt like needles on his skin.

I did eventually doze off what time I don't know I was soo tired I was just wanting 5 mins sleep.  I woke at about 8am to find now the snow had been washed away with the rain and there was just chunks of snow now not the blanket of snow that had been left during the night.  I waited for Dave to awake but he hadn't fallen asleep till late so didn't want to wake him up too early but eventually after packing all my stuff up I gave him a few shouts and then had to wake him as I never knew if he was alive in his tent or just damn right shattered, we decided that walking up pillar in this weather would just be a pain it was thick fog very strong winds and rain probably snow on top, so we decided to just go.

The weather on the met office had been said that on Tuesday it would be 30mph winds with 55mph gusts rain/sleet and snow and thick fog, so I would say they got it on the nose my tent the voyager superlitebivi? walking back down everything was gushing with water we got a good soaking and this time using our gear in the proper fashion we were bone dry.

To sum it all up it was another crazy experience a bit of a let down we never got to the top but I could only imagine what the top was getting as we got some wind and snow, maybe it was a blessing in disguise, we have took note again and more planning is defo needed so we reach our goal and a bit more fitness training for me less beer.