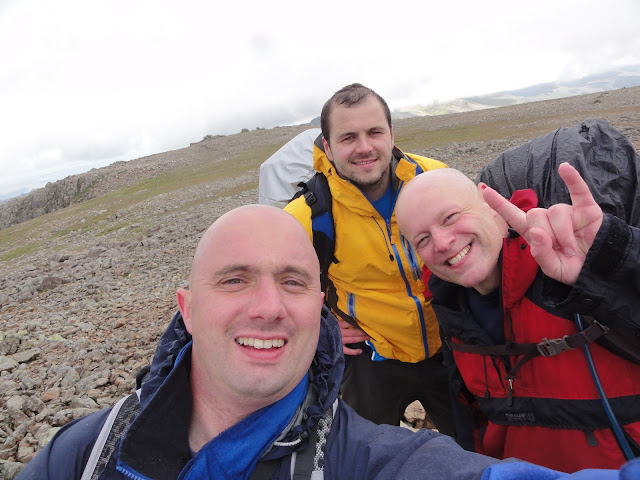 Chris was heading home and was in need of a wild camp, so we 3 wild campers set upon a plan to wild camp on Great End well I think it was Dave's idea but we were all up for it, to be truthful any bloody hill would have done.

Packing was hard for this trip weather was changing again for warmth, I was torn between down jackets and big cameras to warm sleeping bag to summer one.  In the end I went for the camera and summer bag which after been there wish I had took my alpkit pipedream 800, wasn't freezing but I would have slept a little more warmer.

Anyways me and Dave planned to meet up with Chris at Seathwaite at 1pm, for once I was only about 10 mins late instead of half an hour which I can only blame Dave as a mile down the road he realised in the nick of time that he had forgotten his trousers, lol saying that he did have his shorts on you filthy minded gits.


After a quick hi am Paul hi am Chris we made our way up making some nice needed stops not just for filming but so I could catch my breathe, walking up we did bump into some sort of trip out for kids, which later on we found them wild camping at Sprinkling Tarn, I may add quite a few just hope they left no trace. 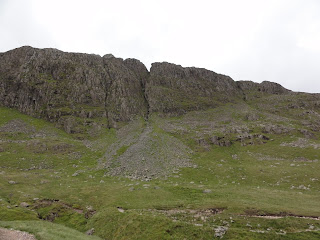 Seeing Great End was a relief we were at the base of the Gully walking around to the more easier access to the summit when we didn't even get off the path from the Gully when it started to rain, having shorts on t shirt it was suggested that we need to stop coats on as it seemed to be getting heavier.  Sure enough even the temperature dropped and it pissed down not for too long but long enough to be soaked through my shorts, my legs stiffing with every step they were cold and wet and needing warmth.

We made the summit and found a few patches of longer grass a bit of cushioning for our beds.  I was putting up my tent and didn't realise a rock under my tent which would play havoc with my sleep lets just say I tossed and turned quite a bit.

The rain had stopped for us, reaching the summit and the view was coming and going quicker than you could pull your camera out to take a picture. I had no phone signal so couldn't tweet my trip.  We had a walk about the summit snapping pictures and bits of video as we could cloud was coming in thick and fast but leaving the same way.

Dave and Chris headed over to the gully to get some pictures of themselves while I went over but found a little seat I could perch my arse in between some rocks and watched them as they defied being scared of heights and stood at the edge taking pics. 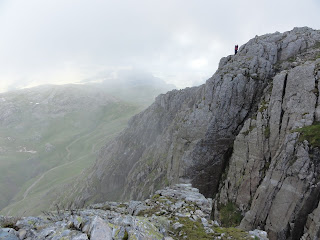 Chilling there for quite some time watching these crazy fookers I sipped my brandy and found that I had phone signal so a quick call to my other half to let her know I was fine, relaxing now as I sat there I can't describe the peace lets just say it was a lovely place to chill.

Few hours had passed we had all eaten me with "look what we found boil in the bag meal" and Dave and Chris had  abit of a competition going on with there steaaaaks!!!, nutters completely.  My tent was pitched pretty close to Chris's and the smell was a pain, like when your out for a stroll on a hot summers day and you get a whiff of someones bbq and you wished you had one going, bit like that but I had my boil in the bag which was tasty none the less. 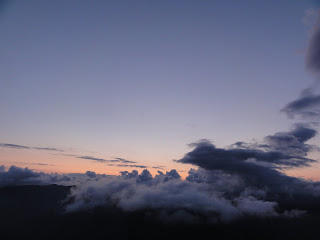 After the food and a bit more picture taking the cloud dropped giving us a nice view the sun was going down and a cloud inversion was surrounding us to see another so close to the last one was nice we all took pics video etc and it topped the wild camp off.

We headed down in the morning having some funny moments all caught on camera which you can see in my video here.  I suggested we hit the pub and off we went to the riverside bar very nice indeed after waiting outside 10mins like alcholics clamming for a beer he actually still wasn't open at 11am, so Chris kindly took it upon himself to walk down a back alley where a door was open which lead to behind the bar and asked if he was opening, after a few minutes he did open and a pint was had, well Chris had a coke.

Another wild camp over and a new friend I shall keep in contact with and hope to share some more trips with it was a pleasure Chris and I hope all goes well on your big day which is coming up very soon, good luck to you and your Mrs