A walk up Raven Crag 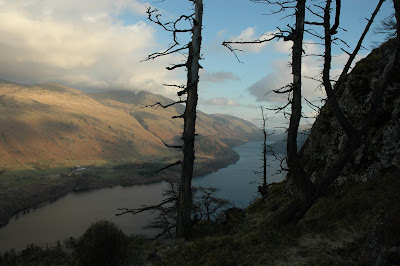 Me and my other half Joanne decided to try and find an easy walk, as it is winter and we have no winter gear ie. crampons ice axes etc. So thinking back to what walks wild camps we had done we come up with Raven Crag, it didnt take long to do and it was an easy walk up plus it wasn't too high, so should be away from the thick snow. We planned on going early but few beers the night before we changed it to 11:30am, sat nav on and off we went not knowning I had previously turned the volume off and was heading on the A19 when I should have been on the A1. About 10 mins on the A19 I realised looking on the sat nav that it was in fact telling me to get off the road take the next slip road off, we had only started and already it was going wrong lol but we did find the funny side of it. Eventually we got on the A1 hit Scotch Corner and onto the A66 finally we were back on track after the little Yaris got pushed to 100mph+ (sorry Joanne) lol. we got to Thirlmere at somewhere between 1:30 and 2pm. My plan was to capture some of the walk on me camcorder the Canon Hv30 so no planning we set about using the cam. on my little tripod and doing some walk past it then running back to get it, one way of getting fit for me running backwards and forwards but at about 3pm we reached the summit and witnessed the RAF doing a bit training nothing like a bit of fighter Jet flying past the noise and speed of them things always fasinates me not that am a plane spotter at the end of Newcastle Airport. It had been very slippy getting to the top everything frozen even the snow had been packed down and frozen off people treading on it on there way up to the summit of Raven Crag . It seems everytime we go away even if its a holiday somewhere totally different I cant seem to get there without forgetting something this time was my hat lol. (big mistake as it 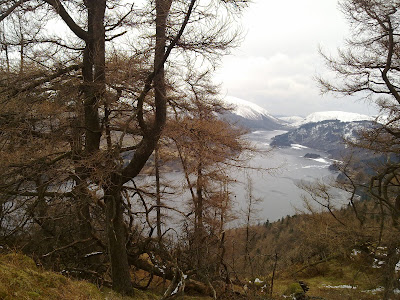 was f**king freezing) The wind was getting up and after a bit of filming and photo taking we wanted to get something to eat but off the summit somewhere sheltered, which we found after about 1 min of walking off the summit little sweet spot trees over hanging so we parked our arses there sit mats out Reactor stove out and wayfarer meals out and ready to be warmed up, I bring the water upto boil before putting them in and time it 6 mins the food is red hot by then, after we finished our meal we headed back down filming as we went trying to pick the best bits and so on. We got to the car at about 4:30pm sat nav back on and it did say we would be home for about 6:25pm but we had to get back the videoing had took more time than I had planned so off I went in the Yaris and shaved 15mins off the sat nav time and we got back home at 6:10pm relief I think to Joanne's mam who was child minding. My finished video is Here You can also watch my friends version here caution it is funny and you may crack a smile