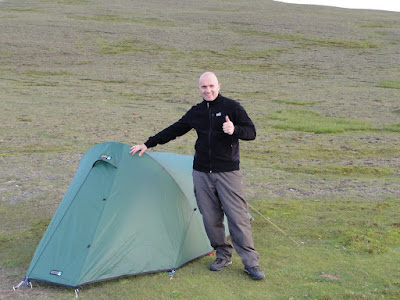 As some might already know at present and for about 5 weeks now I been suffering from the itch, I have an allergy to something or someone or anything as the Doctor put it..... well not going to far into it but it comes and goes as I have been on most allergy tablets some working and some not missing alot of chances to go try my new tent out they started to fade and stop that pain of an itch, to put it nicely I'd rather go through the broken arm than this fucking itch. So with my new pill Benedryll and the fact that I was running out of tablets and my itch had gone, I made the choice to go on a Wild Camp with Joanne with my new tent to test it in the field in what was good weather. After getting up to the summit of Blencathra which to be honest I didn't think I was going to make my fitness is worse than I ever imagined (work to be done), I pitched between the cairn and the top of sharp edge sort of in the middle where it dips down, it was close to the path but it was late and I had to be back home for 10am to pick my Daughter up so it would mean we would be leaving at about 5:30am-6am, so I wasn't too bothered. As we wandered around Blencathra summit 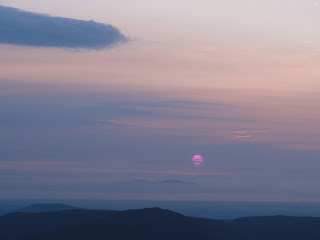 we watched as quite a few fell runners kept coming up hmmmm is there a fell race on or are they just training? who knows, tried to find out on google but couldn't, I actually heard when in the tent 1 fell runner talking to his buddy about us saying " I bet they came up here for some peace not knowning they would be disturbed by fell runners" hahaha this did make me chuckle yes we obviously picked a time and place where quite a few would be running past during the night, it didn't bother me its a free world each to there own and if knowing about the fell runners I'd still pitch where I did just to see the sights night and morning well worth it.
The tent my first impressions is for a 2 man tent its light and packs down very small compared to my other 2 tents the Vango Spectre and Hurricane 200. Reading other peoples reviews on the tent and getting the instructions which actually say quote:- To make certain water does not leak through these seams, we recommend that you apply a seam sealer such as Silnet by Mcnett to the exterior of the seams on these models. Considering that I had just payed £290 for this tent I would have hoped it be 100% water proof for the usage that I would be using it, so spending another £7.65 to just be on the safe side for the sealer, that's what I did reading up on it on how to apply alot of people went for the thinners option this is mixing either the sealer with thinners or making your own, this being option no way I read and found a more nicer to my tent option, alot of people will argue that thinners will not and does not affect your tent, brilliant you lot go use it as like everything in life you did it and got away with it well done, my luck has never been like this and if I had listened and 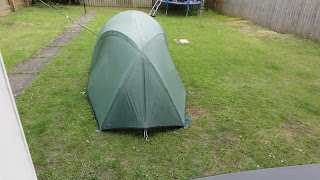 went ahead my whole fucking tent would have leaked every splash of thinners touched the tent would have leaked lol, anyways rant over I found a bloke who had done it by erecting the tent and flipping the fly inside out pegging it out and seam sealing using only the sealer (no thinners) sealing the inside so you don't see the silicone strips you apply, this sounded good to me and I used the 45g tube as it said there was enough, guess what it wasn't well I put it on thick just to be sure lol so I had to get another so now my tent costs are just over £300. Putting the tent up was easy am in the middle of doing a video of that which you will be able to see on my Youtube Videos. Am not a fan of the clips on tents I much rather insert the poles into a sleeve, saying that I am a bit of a strange one lol, the pegs like all Terra Nova superlite tent pegs are fit for nothing but putting away in the cupboard for when you sell it, I like the fact that when you have all you clips on and now its free standing you can easily toss the fly over and if windy then its a case of just finding the corner eyelets and putting each corner onto the pole ends at a time easy, my first look at this was not good as am use to vango push the pole through the sleeves end of pole in eyelets and bobs your uncle fanny's your 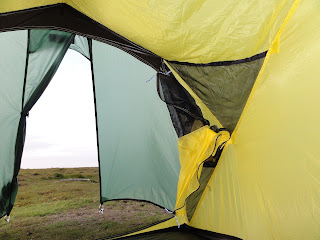 aunt tent up peg out and I will say it is still alot easier, but Terra Nova have designed the tent this way and it isn't a problem the tent still goes up really quick and when taking it down just pull the poles out of the eyelets and start folding them up the pole just slides out of the clips so its very quick to get away if its raining, if your are on a 2 or more night trek then obviously this design is much better than the piss on you would have if your vango was soaked and you wanted to separate the fly from the inner so good design from the Nova people. Right tent up whats it like for me and Joanne shit simple not be sure if she would get back into this tent, why cause she likes a bit of room but to argue this point I bought it for solo camping and for that it is perfect 2 person tent + gear not good, I put my standard multimats in the tent fit nice at the door side by side but half way down they did need to over lap each other as it gets narrow at the foot of the tent, so if your like me and want your 2 bags both are not massive bags mine 35litre and Joannes being a 28litre both made from Osprey in the tent with you its a bit cramped compared to my Spectre, I put both bags at the foot and just used them as a leg rest but Jo couldn't get rested she had a very bad night sleep and told me my snoring was pissing her off as well as the talking of the fell runners, needless to say the next morning someone wasn't too happy with next to no sleep lol, best night sleep I had in a tent them benedryl tablets and brandy knocked me straight out hehehehe. So back to the tent am very happy with it me with my snoring and my other half + adult antics lol I had no condensation at all everything was bone dry well everything tent wise lol. I have tried to find faults with the tent to pick on it so too speak the zip on the inner part is a bit tiny reaching for the zip of the fly is a bit of a stretch but to be honest there not problems I need to be in a bit shity weather to see what its like, my Spectre was good in alot of shit weather so am hoping the Voyager can do as good if not better, there wasn't much wind on the summit so I can't say if its a flappy tent but its pretty taunt when pitched so I can't see it being a problem so first time out in it I would say its a pretty good tent for solo, I wouldn't like 2 16 stones blokes in there be a bit of a struggle, getting in and out of the tent is ok I could niggle and say the fly opening should have been wider for my massive shoulders to get out without rubbing maybe a prob if the tent is soaked I'll get wet getting out lol. So my verdict buy it for a real comfort tent for solo get all your kit in no problems seam sealing is a pain and Terra Nova should supply the tent done £300 for a tent and not seam sealed is fucking disgusting its light packs down small if your a fatty or you muscle bound don't get it you wont fit in unless you open the whole front of the tent porch is big enough condensation isn't a problem, am very happy with it so Geoff I will not be selling it cheap to you and Terry clips are ok lol. 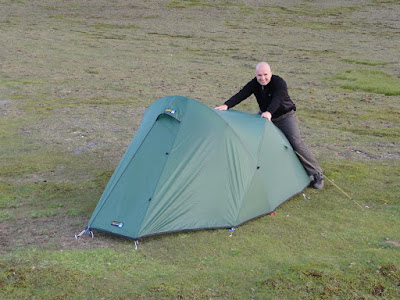