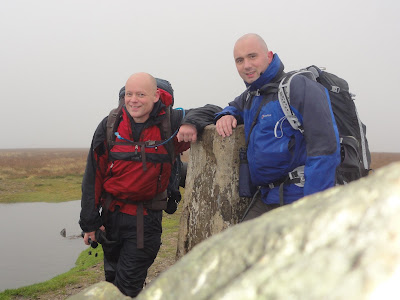 Where to start with this one lol, it started off with Dave picking me up to goto Whernside for a 1 night wild camp, we hadn't reached the end of my street when he had to turn back and go back to mine as I had forgoten my fleece, so picking that up off we went.

As we headed for the A1 with sat nav on which told dave to take the turning I said no its striaght on pmsl straight on for north A1 we wanted sout so after a little de-tour we finally got on the A1.

We arrived and Dave lead the way with his satmap a very good device which I will be having one of those off santy lol.  Weather was grim it was spitting on to rain and I checked the weather before we went it did say drizzle to showers and 35-40mph winds with gusts reaching 50mph, so we knew what to expect (lol), did we fuck the drizzle didn't turn into showers it turned into pissing down rain which apart from it letting on 1 occasion for about 5 mins it was with us till morning.

With me still not fit after birthday celebrations lasting well as long as possible and  Dave carrying his heavy bag we took a nice gentle pace up and with frequent stops which were a god send for me, time was ticking and it should have been dark just after 6pm but it kept light for quite some time after, after about an hour and a bit it turned and the lights went out really quick 1 minute we could see barely the next it was time for head tourches and trying to nav through the pea soup which was thick, it was pitch black before we got to the top of Whernside but we didn't even know we were there walked straight past the trig point and shelters, coming down to the tarn we wanted to camp at, we had to cross some rather intresting boggy shitty moss we got to our planned camp site for the night.

We picked out a place to park our tents trying for the flattest bit we could find and started to get the tents up by now we were both soaked to the skin top to toe and we had our water proofs on Dave sporting the full paramo rig out and me with a bergaus water proof coat and water proof trousers cheap ones from the local camp shop, a review of this gear SHIT water proof my arse.  So on we went with the tent pitching freezing hands and the winds had now built up to gale force it took me a few more minutes setting up the Voyager super shite and because I had took 1 minute or so to get the fly sheet over inside my tent was a covering of water yea!!!! more water......with a bit of struggle and fight we both managed in some style and fashion got our tents up as we were cold and wet we couldn't get in the tents fast enough fuck the standing about having a drink as planned.


So in my tent as I just looked at the water wondering what to use to dry it up and dripping lots more water of my soaked clothes I laughed where the fuck to I start, after getting that part sorted it was off with my clothes and into my jog pants I had brought along for extra warmth thank the lord oh and a spare pair of socks and a t-shirt I forgot to bring shit now what to I do, stove on water boiled into the platypus I lay it over the t-shirt for it to dry wrapping it up and trying in vain to get it dry.  (note to self must take extra clothe in exped bag) Idiot.  I finally got it near dry and started on my fleece whilst I warmed up my chicken casserole warming inside me was nice oh and sipping brandy was even better, I shouted over to Dave to tell him the drink is open and if he wanted some he would have to come and get it cause am not going back out there, still makes me laugh cause with the wind and rain making some much noise he couldn't hear me, I left him some.

As we couldn't hear each other and we had no phone signal to text I decided to bluetooth, so there I lay sipping brandy messaging Dave from 3 feet away enjoying watching my tent cave in, with the wind so strong it was hitting the back of the tent and actually pushing the tent onto me at 1 stage it pushed the whole tent even the door way, nothing better than a face full of Terra nova tent again I laughed.

After the brandy had gone I settled for the night watching my tent as it came down and off I went to sleep more brandy makes you sleep through winds note added to brain.  We woke in the morning Dave not having much sleep, both of us dreading putting on our soaked clothes, which we did and packed up and off we went, not long into the walk back down after a wander around some caves we seemed to be drying out slight wind no rain and the fog had lifted a tad for us to actual see where we had stayed the night, quite a few nice views on the way back over taking note that there was a train crossing over the viaduct.

lol oh and some water proofs or bin liners might work better.