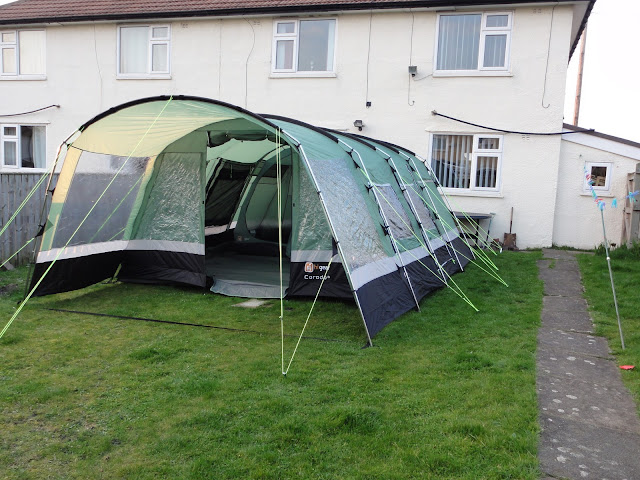 Well I seen my newest purchase a few weeks ago whilst mooching around Go Outdoors, and after the though of family car camping and needing a big tent, a new one was defo on the cards just which one theres so bloody many of them.

After a long time spying them up and down and becoming shocked at the prices I made my mind up on the Hi Gear Corado 6 a few reasons why this tent so here goes.

First reason was it was half price £250, second reason was that must family tents have bath tube sewn in ground sheets in the living room bit, now if you look at the doorways most of them are at a degree slanted backwards which would catch the rain water incredibly, the Corado has a porch already fitted so you could even cook in it if it were raining. 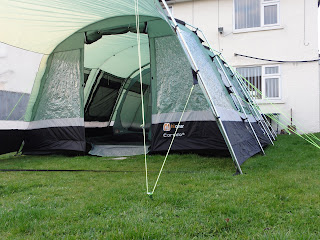 So with that in mind I read a few reviews asked my dear Mother to lend some cash over and off I went to purchase the tent.

A few things worried me in the reviews people were having problems shutting the front door.  After putting the tent up I tried this and yes it is hard to shut but a bit tweaking and it be fine moving poles in and so on, I didn't know that the living area bit is not totally sealed as the front door just has zips at the side and none at the bottom just a flap which I will be sewing some Velcro to stop all the bugs getting in.

Putting this mother fucker up was a total bitch.  END.

Well trying to keep calm me and the other half struggled like 2 twats, gladly only to be laughed at by the neighbours we got it up but need a lot more practise its heavy and trying to pitch it like some youtube video I watched was not as easy as the video led you to believe and the way the instructions said was quite fucking impossible unless I had 10 people 5 on each side to keep the poles from falling down. 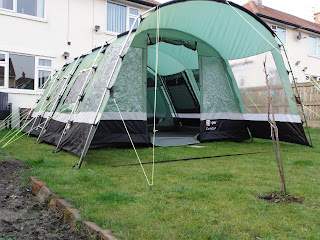 I have it now still standing in the garden a bit scared to take it down incase well it falls on me and I die or worst still I cant get it in its bag and I set alight to it out of random temper.

All shit to one side though once up its fucking massive and will serve the purpose when and if I make it to the family car camping in the summer me, our lass 2 kids and the dog with still enough room to sit and chill in fact the other night am sure I was in there drinking a Brandy saying this is the life but that was surely just a dream.

A little video I put together enjoy