A walk up Helvellyn via Striding Edge The report..... 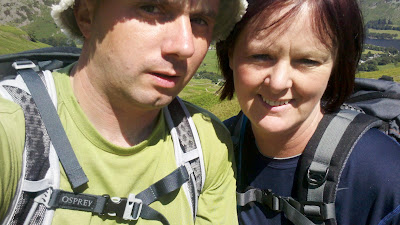 So as you all must be aware me and the other half went up Helvellyn via Striding Edge, my first ridge walk/scramble.

We set off late as usual, the weather was looking good for us in fact for a change it was a bit too warm.  My nerves were attacking my stomach as I had a feeling I might not get across this Ridge, as I am scared of heights.

My good mate John Paul let me borrow his GoPro hd helmet hero, what a fantastic bit of kit its a tiny light weight camcorder which you can strap it to just about anything and it comes with a case for waterproofness.  For this trip I was going to strap it to my heeeed wearing my hat for comfort it wasn't too bad left a little red mark on my foreheed but was worth it when I got home to see the footage.

Anyways back to the story we got there and looked for a car parking space and found a nice little old grannies house to park in front of, thing was I was double parked but I thought fuck it there is plenty of space be ok that was until poor old Mrs hen came out "do you know you can't park there" she squawked grrrr I was late to start with without having to look for another parking space, anyways I moved it to shut her fucking trap Jesus what happened to live and let live.

After moving the car down the road and a quick walk back up we started out accent passing a pub (which on this fine hot day would have been a dream to pop in and sink a good few) but instead we carried on up the hill passing the campsite and eventually hitting the trail up. 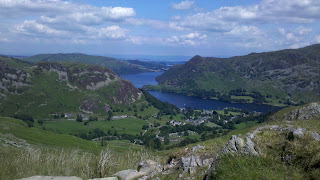 A lot of stops for a look at the views was in order Joanne had not done any walking for a good year and well I'm just fit as a dead horse, so we chilled at every excuse.  "look at the view."  "wait some people are coming down we shall have to stop let them past."  You know how it is you all been there.

We parked our arses on a nice rock seat just before the start of striding edge, for a bite to eat a boil in the bag meal each, after a bout a 20 minute of chilling out and me sitting bricking it we started our first ridge together.  I strapped the Gopro on and hopped for the best.

It started pretty easy and I mean that in my fear of heights but it didn't take too long when we went over the top of the ridge, my legs like jelly me panting hard nervs and I still managed to stop and look around without falling to my death.  We past a few people resting and seen a couple of lads on there way up using the path below us, I was quite impressed with myself and called them for using the chickens path lol.  Yea am brave.

So eventually we caught up to the 2 lads we had seen heading the same way as us and they too were scared never done it before and we actually walked along with them on to the bad step, taking this opportunity to have a drink and a rest for a good few minutes they too stood there trying to find which way to go up the last part eventually they asked me if I was going up I said I will be but after my rest, hoping they would go first and I could watch them do it lol.

After what seemed like hours they headed to go down the bad step, few minutes later and they were back telling me that they couldn't see the way down and it was too dodgy so without checking it out myself, we all watched 3 blokes coming down 2 who were very confident and another shitting it lol.  They didn't come up the bad step but popped around it on a small path.

So after seeing this and the 2 other lads standing about I thought fuck it I'll go first as I could also see 2 other people coming along so off I went.  The path was more for insects to walk along and I was wishing I had checked the way down the step as I think it might have been less scary, we got to the beginning of what I can only describe to any other people who are scared of heights as a vertical nightmare that was until I had actually got on with it and scrambled up it what a buzz.  It was definitely a adrenaline rush for me for sure.

We both made it to the top with alot of excitement both proud of each others achievement, I stuck my thumb up to the 2 lads that had watched us get to the top, then whipped my canon cam. out to capture some footage. 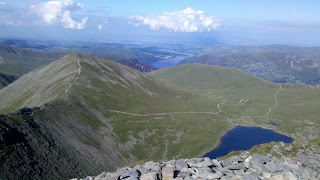 The views were amazing this was the second time up on the summit of Helvellyn the first being a walk up from Thirlmere to see nothing but cloud but this time we could see for miles it was a real icing on the cake.  We spent quite some time admiring the views taking pictures and video and then the question came did we have the balls to go down Swirral Edge.  We went over to check it out and sure enough it looked fucking scary but we had done half of the walk and to me the worst bit so fuck it we said and off we went down Swirral. 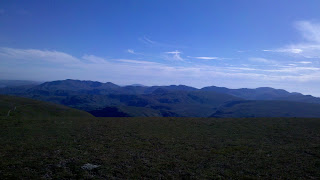 Swirral edge was ok, on the way down a bloke came running down he slipped over and he replied he had to get  down and he was sorry, I stepped back and let the man past as he was defo in some hurry, why?? who knows I only imagined that he had getting bad news as he ran the rest of the way like a crazy man....(if your reading this then hope every things ok mate your quite lucky you made it down).

So after the bit drama of the crazy bloke we made a steady pace back to the car I mean the pub we just couldn't help having 1 to celebrate the successful mission hehhehe.  We got back just after 10pm having set out just after 10am it had been along day and we both were fucked.  I managed only 2 Brandys and went to bed it had been a Saturday night to remember.

Would I do it again fucking too right and I plan to take some mates who aren't into the walking to give them a bit taste of what I do lol.