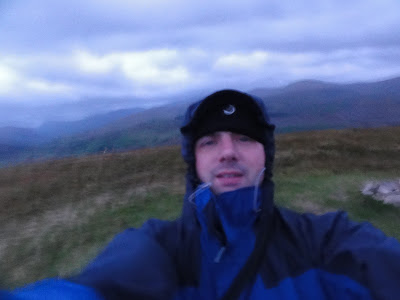 Once again this trip wasn't planned till last minute, me and Dave Murphy quickly took it upon ourselves to go do a wild camp in storm force winds.  Dave met me at mine and off we went, Dave as usual with his sturdy Akto and me finally testing my Vango Hurricane 200, I have been out once with this tent just below High Street in the Lakes but when me and the other half took the tent up it was the calmest of weather, so as until this trip I have never had it up in winds at all.

We arrived at the planned overnight car park, remembering the winds are very strong the over night car park was under a tree to my delight as it was my car we went in....  We got kitted up bag on boots on and off we started, the wind at this point was mild but you could hear it and see it blown the tree tops about like mad, oh my poor car.

We took a gentle pace up and still I panted like a fat kid in a sweet shop, I was and am so unfit it makes for the walk to be a bit of a nightmare.  Taking stops to admire the views as we headed up and taking a bit of footage you could feel the wind picking up more and more.

We got about 1200ft up and checking my kestrel 3000 I got a recording of a max gust of over 60mph, kneeling down on my bag and trying to keep myself from blowing back down, hoisting the Kestrel up and taking readings I was like a kid with a new toy.  Trying to put our back packs back on came to be a very hard task, the wind was averaging 40mph and gusts of 50-60mph hitting us quite often.  Dave was first to try the near impossible task and the amusement was very high on a scale basically I pissed myself laughing as he got blown around as he tried to get his back pack on, what a laugh.

Back packs on eventually as it became even harder when both are in hysterics.  We plodded on walking was hard my back pack at its heaviest as I took extra drink with us going early and food and water, for every gust it would push you back but it was the constant wind now that was making it hard, my fitness was no longer an issue but just to press on and get to the top so I could rest my legs.

Getting to the summit was an achievement in itself but now we were totally exposed, that's the Great thing about Great Mell Fell reason why Dave picked this hill to camp on it was exposed with a really nice 360 view from the summit.  Winds were battering really hard and just standing there was like walking up hill trying to keep yourself stood still was hard, after a bit of conversation and more checking of wind speeds we decided to look about to see if there was any sheltered spots.

This was now really punishing on my legs trying to walk over the mounds and pot holes off the path up was hard I went over a few times on my ankle with the wind not letting up, we walked for quite a bit checking out different places, I must add that if you know Dave I think he slightly losses all concept of safety when up on the hills, as he was looking at places behind trees, what made this worse was we would be shelted as long as the tree stopped in the ground for if it didn't it would be squashing us.

After checking quite a few possibilities out all of which weren't flat I said we should just camp on the summit as planned, to be honest I had no energy left, I need brandy and food not in that order but it was needed.  We headed back to the summit where Dave started to pitch his tent with me star fished on the floor keeping the tent from blowing away, what a sight I can imagine. 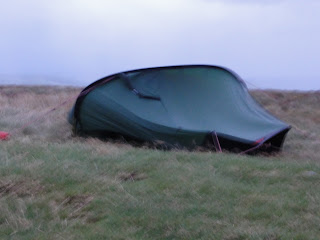 Putting the Akto was hard and I wouldn't like to say how long from start to finish it took us, after it was all pegged down and pole in, I left Dave to it re tension the guy lines and sorting the finer details out.  Watching it flex in the wind was something else I captured some of it on camera forgetting as always to film the best bits like me and Dave trying to get the thing up in the first place but credit where its due it was up and stopping up all night?? well that will be with us for the rest of times until we get back out in storm force winds.

So Akto up it was our turn to get the Vango up, I pulled it out of the bag and really feeling the force of it trying to rip out of my hands, I should have put the shitter straight back in the bag, however I didn't as I'm not one for failing.

Dave and me clinging on to this tent as it flapped in the wind am quite surprised we didn't take off as the gusts were up and past 70mph winds constant no lower than 40mph, we got her to the ground (the tent that is) wrestling her all the way I got Dave to keep her down as I got the poles out and started threading them into the sleeves, all poles in the tent was going mental taking off and flapping all over the place I was repeatedly getting smacked with poles and tent, with Dave making sure the tent wasn't about to be the fastest flying tent in the uk 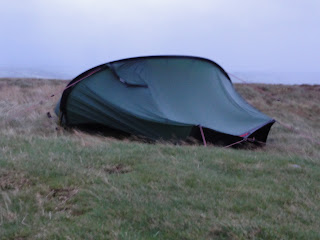 I battled with it for god knows how long I managed to get 1 pole in, now usually with a little help pulling on the top and the other person putting the 2nd pole in the cups, it pops into a dome shape but this was impossible and with only 1 pole in the tent flapping all over the place it actually bent the poles and with further inspection and split one.  It was game over and time to stop trying .

A brief chat and we both agreed to go further down and hopefully we could get this fooking tent pitched so I could have a well earned drink.  Dave decided to leave his tent with only his mighty pack keeping it from up sticks, off we went back down AGAIN,  Dave found an already felled big as bushy as tree which hide behind was pretty well sheltered still windy but nothing like the summit, out IT came again and threading the poles through and 1 pole in now for the 2nd, it snapped in my hand luckily not cutting my hand open, it felt sharp and my hands by this time were cold I looked but I was fine then the pain really set in.

It was time for me to call it a day the pole was snapped and I had no tape or owt to fix it with, I considered sleeping in the car so not to spoil Daves fun but in my mind I just wanted to go home.  I was totally pissed of and the thought of burning the tent passed my mind.  My fun was over Dave being the nice guy he is suggested it was ok and he too would just call it a day.  I cant describe the sickening feeling.

We went back up to take down the Akto Dave taking the opportunity to do some more videoing which you can watch here.  We headed off back to the car, it was dark and was going to be a nightmare getting back I was fooked off them winds highest recording was 79.1mph but am sure I would have getting it over 80mph as it was slowly but surely getting stronger. 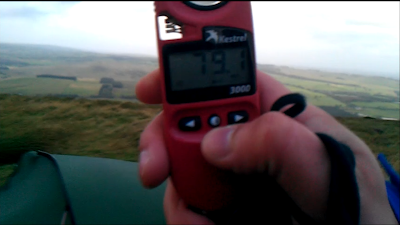 Back at home telling my story to my other half Joanne I went to make sure I had turned off my gps satmap, I couldn't find it anywhere I text Dave to make sure he hadn't picked it up then another rush of "OH NO" I realised when I uncliped my belt of my ruck sack the damn thing must have fell off as I cant remember pressing stop on the satmap.

Next day after A real good drink and sleep I headed back to where I had parked to find no satmap but a note on a car that was parked in the very spot I had the night previous.  It had a phone number and said "Anyone lost any hiking equipment please phone"  I knew it was my satmap but was it ok, it could have easy been driven over.  I couldn't get through to the number and had to wait nearly 2 hours and then a couple came and I jumped out the car to find they had found it and left the note.  The satmap was fine and I stuffed what only cash I had on me a tenner into the woman's hand and walked away thanking them and to buy themselves a drink on me they didn't want to take it reason why I walked away.

A lovely couple it regains my trust in people as I don't think many would have done that so a very big THANK YOU to them I never did catch there names I was just too over joyed.