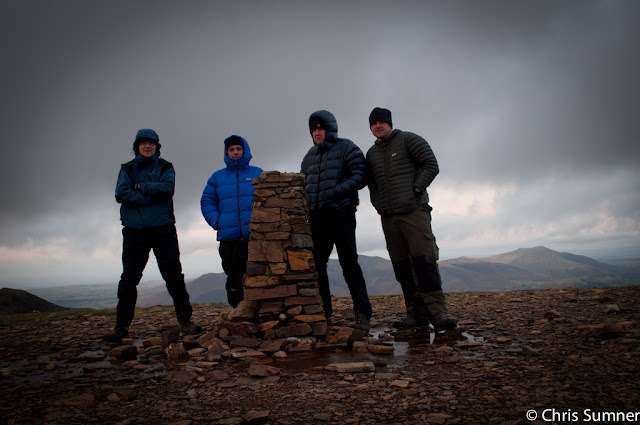 I had booked 2 days off work for this little planned trip, with the help of Alex who basically sorted route and where to camp out, the trip was well sorted, there would be me, Alex, Andy, Chris and AL whom didn't make it to camp, shame as he missed a really good wild camp.

With route and place of camp set it was all last minute what time we would meet up and a few Dm's later on twitter the night before, 11am was the time the meeting place Coledale Inn.

Weather of late has been a bit up and down but it wasn't going to be warm so I took my winter bag Alpkits pipedream 800, I also made a good decision on taking my RAB Neutrino Endurance down jacket for once on the summit you soon cool off from the walk up, and this jacket is the dogs bollocks it feels lovely on and up to now I haven't been cold in it.

So Friday day of the trip all packed and ready to go the panic sets in going through my mind like a missile "have I forgotten something" as I always do, running over sleeping bag, mat, cooker, meths, lighter and on and on it goes and it doesn't stop there either subconsciously I must be still racking my mind when am on route in car as now and again the question will pop up into my head "shit did I pack food".

I left packing till Thursday night and the other half was to go to Asda for another look what we found boil in the bag as I only had 2 and wanted 3 with us meeting up early I thought I'd be prepared and take some dinner.  As always something has to go wrong and this was going to be it they had no beef in velvet porter so I was buggered.  I was going to have to go to gooutdoors and get me a wayfarer's meal, so a de tour was on the cards to the Newcastle branch, for some reason this branch of gooutdoors tests my ability to want to kill someone as every time I go into this shop they don't have what I want or I ask advice and the person given me advice knows fook all and I could show him up in 10 seconds flat.

So if you haven't guessed by now the meal I wanted lamb, yep they didn't have it so I opted for chicken casserole.  Meal sorted and now I was running 18mins late satnav was telling me that I would arrive at 11:18am damn it, yet this is 1 of my bad habits anyone that knows me will tell you I shall be late to my own funeral you watch.

So foot down I followed the satnav a different way than my usual A1 to scotch corner and over to the lakes on the A66, my little car did me proud and my lead right foot helped it along and I got there for 2 mins to 11 not bad eh, just in case your wondering I never broke the speed limit as that's against the law ;-).

I arrived at the pub and spotted Andy and Al not too far away but parked in a little car park away from the pub, I got myself all sorted boots on and Chris and Alex came we were all there as planned a little after 11am which was sweet going by any ones standards. 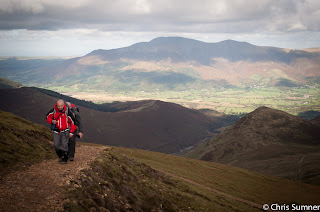 A brief chat and on we marched or is that ran it didn't take long for us to stop and check the view, this was to be the pattern all the way up as this is what its all about plodding on up with plenty of stops to check where you are, I think if we had being able to keep with A.W. aka Alex we would have been up in an hour as within a year he has already sumitted over 100 mountains.

We chattered and had many a laugh on the way up a bunch of lads that you would think had known each other for years and in fact some of us had just met and the others had just met only a few times.  So on we plodded now this walk was going to be a killer my fitness level has gone and I had a bit of cold nothing that I could feel (it never made me feel knackered) but going up here my breathe was gone with a 5 min walk a true killer, even my legs were starting to ache and not drinking enough water gives me cramps too and these were coming on.

We got to a hill called Sail we all looked around the summit for a decent bit of grass for pitching, it was a bit boggy but we could have pitched there, the only thing was this big arse hill (Crag Hill) sitting right in the view of any sunset we were going to get.

We had to make a decision and quick my legs, body and mind wasn't going to last much further, we had a brief chat and decided to go for it we had planned to camp on Crag Hill and then I spoke to Alex to change it to a more grassy hill he said a little bit further there is Wandope, so we were now going to make a go for it and hopefully get to Crag Hill and just forget about Wandope.

We had to go a little down before we started the accent on Crag Hill and we lost 1 of our group Al he made the decision to either camp on his own back on Sail or just head back and he headed back, suffering from vertigo we were 1 man down but after a long debate we headed back on up Crag Hill. 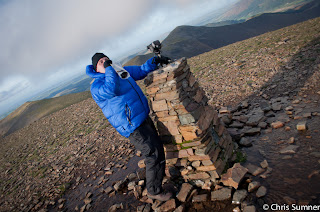 Reaching the summit was hard make no doubts about that, Andy was collapsed on the summit I was ready to collapse but an energy boost from making it there and the views were amazing, a bit video done and pictures we all began to set up our tents.

Tents up and the fog rolled in we couldn't believe it but it didn't last very long and we were back on for a bit sunset.  We could see Scotland (Dumfries) it was a truly lovely Hill to pick for the camp and thanks to Alex this is where we were.

Once the tents were up and a bite to eat had it was time to sip away at my Brandy, nothing better than a bit Brandy to celebrate the achievement of making the summit.  We talked till most couldn't bare the cold any more and everyone hit there tents.  I found this strange as me and Dave stop up till after 12 chatting away, so I captured Chris leaving his tent door open I crouched down and chewed his lugs off for a good half an hour before eventually heading back to my own tent.

Morning came and fog was in but I wasn't complaining we had seen the views all night and as long as you get to see some its enough.  I had packed a bit of bacon for this trip not my usual thing to do but I thought I would for a change, after a skin full its always a welcome smell bacon cooking.

We all got packed away and headed off down and as we were coming off Sail we seen 2 down hill riders pushing there bikes up a chat to them about the route they were taking and they informed us that the fix the fells path had spoilt there fun as it use to be 1 long path straight down and he even said it was the fastest in the Lakes but now with corner after corner.

Taking a slightly quicker way back to the pub we bumped into some sort of dog meeting where they were blowing there horns and 4x4 were parked all over the place full of dogs and flat caps walking sticks and all.  I know this sight would probably piss some of you off same with the MTB downhill riders but live and let live that's my motto.

We got on to the road and my legs and feet were finished I had on some new socks which weren't good at all for my feet, my feet were on fire and then all of a sudden everything went the pain the fire, why because the pub was here.

Chris and Alex were talking about going into Keswick for a pint but I had to demand that this pub had my name on a pint and I must get in there to take it, how glad was I the pint was so refreshing it was like nothing else and if it hadn't been for the other half's birthday on Sunday I would have booked myself a room and chilled out there with a good few of these pints.

After a good laugh in the pub we all went our separate ways a really good trip had by all, a real good bunch of lads.

Just a little thanks to Chris for letting me use his pictures all which have his name on you can click here for more of his pictures of the trip.  You can also see Chris's video of the trip and also Alex's video of the trip just click on the links.  Please comment and like on youtube as alot of work goes into making these videos and a quick click on the like makes us know your liking them no pun intended.  Thanks for all your support I keep an eye on my views of my blog and videos, which are doing ok thanks to you.