A 2 night Wild Camp around Ullswater

Where to begin on this trip.....I planned this trip with a friend of mine Chris Cox aka Hilleberg tent collector of the south :-).  Chris was going to be working up at Newcastle and on his way back home wanted to squeeze  a 1 nighter in the lakes.  So with my last failed attempt not satisfying my taste buds for wild camping I agreed. (as long as I could get time off work)  Which to my joy I could and I put in 2 days off Friday and Saturday.

Checking weather it was looking good for this trip cold but no rain and very little winds forecast.  My plan now was advancing into the big unknown world of multi nights out wild camping, after all I only ever do 1 nighters and my thoughts were to do a TWO...........nighter pmsl.  So with not much thought I planned on leaving work at 6:30pm and travelling to the lakes and getting my 2 night cherry popped.

I had to use my very first bag I bought its a unknown name brand 65l and its Shit with a capital S, I can't pull the hip belt tight enough to take weight off my shoulders.  My bag 19kgs was at its heaviest taking 2 cameras lots to eat and a full bottle of brandy (over kill).  Learning anything from this trip is I took too much drink.

So I got to Glenridding at 9:30pm a nice easy drive, roads were pretty quiet it was nice and fresh as I like to call it cold or bloody cold to anyone else lol.  I set off and took a nice stroll up stopping to catch my breathe, it was a pleasant walk up a bit tiring and when it got to about 11pm I had decided to pitch just under Birkhouse Moor.  A bit close to the path walking up but it was a sweet spot I had seen when walking up with my other half to do Striding Edge.

Hilleberg Allak pitched and a few phone calls and boil in the bag on from Look What We Found, beef in velvet potatoes very nice indeed.  I sat till well after 12am just taking in the stars and lights from Glenridding wind was calm I would get a little shake from time to time but it was bliss.

I called it a night after a few sips of Brandy+Coke and woke early just after 6am, looking out it was still dark and a brief chat with my mate Chris I got my cameras out ready for sunrise, it was very nice indeed, taking some pictures with my compact and setting the video camera up for hopefully a short video on you tube.  I packed up and started my journey up onto Birkhouse Moor.

I can tell you now it wasn't the easiest walks I have done with the weight hanging off my shoulders, I made a few stops after all I was in know hurry I had all day to relax in the fells.  I was to be meeting Chris Cox at red tarn for the planned camp and a few other friends too.  I took some pictures and soaked in the views I spent a good 10-15minutes admiring the view I could also see a cloud inversion over at Cross Fell .

By the time I reached Birkhouse moor I could see the cloud inversion heading over to me.  I sat on a pile of stones just soaking what views I had I lost track of time.  When I heard someone walking up behind a "hello" exchange and then a "alreet muss".  It was Gary Sinclair aka northlakesuk, We chattered for quite sometime a nice bloke so if you ain't following him on twitter link is above and for his you tube channel.  After admiring the view and talking Gary was heading over to Catsye Cam. 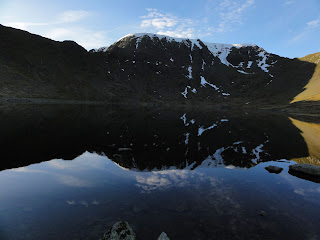 I stopped for a while longer there before I went over to Red Tarn to have dinner another look what we found meal this time it was a Lamb hotpot, I love lamb and it changed my fav from the beef to this I will be buying many more of this lamb one, damn shame I only had 1.  Dinner gone I took some pictures of the reflections of Helvellyn and checking the time I thought I would give Catsye Cam a go.

Mind you not before I watched what looked like a young lad and 2 older people having what looked like a stage play.  The young lad was arguing well shouting the odds to his fellow adults he started to walk up towards Swirral Edge and then back shouting he was going home, they then started to walk around the base of Catsye Cam and then the young lad screamed his back pack went flying he then followed it picking rocks up and tossing them at his back WTF I thought.

I go away for peace to get away from the hustle and bustle of life and then am listening to this little prick however it was fun to watch as after he had thrown quite a few rocks at his bag he then followed his older people, lol (its a bloody good job it weren't my kid) cause I would have been bouncing rocks off him lol. 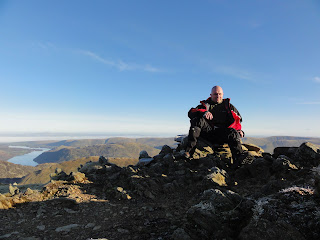 On I went, with all the action gone, up to Catsye Cam where I saw Gary again on his way down I asked how hard the walk was "easy." he said and it was well sort of I still made a few needed rests on the way up.  At the summit bag off it was time again to look around at what was around me I can only describe it as beautiful, weather was calm dead silent apart from a few voices you could hear from striding edge no wind and it was surprisingly warm.

I took some video the usual stuff you know pan right pan left.  I haven't checked it yet so fingers crossed its good enough for a video for you tube.  After I spent quite some time I got in touch with the lads to change the camping spot, as Red Tarn as nice as it is, the views from Birkhouse Moor were amazing and the fact the cloud inversion was still rolling towards me.  Everyone was fine with my choice, so off I popped down and over to Birkhouse Moor for my 2nd night out under the stars. 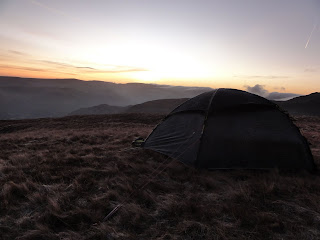 Alex was first to arrive with Al and they phoned to let me know they were on their way, about half an hour Peter aka munro277 dm'd me from Helvellyn he was with his dog a chocolate Lab. called Oscar, I did wonder if they were on top which way they were coming down.  I decided to put tent up getting my door spot on so I could wake and see sunrise.  Also having a sneak sip of brandy, I seen Peter & Oscar waving from the top of my seat of the day.

A good  chat was had and what a nice bloke being in the wild camping game for some time and had his back pack weight sorted and lets say it was a wee bit lighter than mine lol.  Peter was using the trail star  a very good shelter, he also was waiting for his mate Chris coming a bit later on but that made the total number of 6 people and not to forget Oscar lovely natured dog. 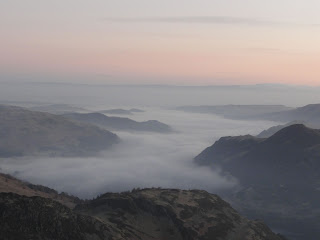 Another 2 friends made and we waited for Alex and Al to get there after some time we spotted them and wasting no time got there tents up and joined in on the conversation.  As dark fell Chris Ritchie and Chris Cox arrived by then my booze was flowing and with there 2 shelters up and more laughs right into the night I (think I headed back to my tent) were a good sleep was had. 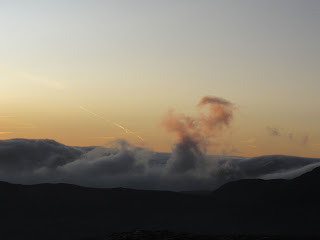 I woke just as the sunrise was happening and Alex informed me that I had dropped off to sleep in door way of tent with stove on the go.  Too much drink so lesson learnt this time not too take too much up with me.  Still it was a good laugh on the night and well a little worse for were in the morning a bacon sarnie pulled me round and some more convos and pictures taken.

We started to pack up to head down always the worst part of any trip, to round off this trip the weather and the views made it really an amazing pleasure but to meet up with some really good lads made this trip top notch so thanks to all who came.