Hopefully if your reading this then you should know the lead up story the added dog to the trip which was to end my trip early and smash my trip to bits.  So am not going into it read the blog post here.

So I had a full car and I do mean full one seat left for dog and my seat. I had took enough gear for a full week of camping anywhere.  I wasn't prepared for a dog that just couldn't hack the outdoors.

When I left the house I was blinded by the excitement of getting into Scotland and exploring. The meeting place was at a services near Carlisle where me, Dave and Paul would meet and drive up together. Dave would get there first followed by me then a little later on Paul would arrive.
We had a quick chat, postcode in satnav and off we went stopping only once for something to eat at a services.

We arrived at Lock Chon where we would spend a night wild camping.  The weather was fresh perfect for me and the sun was out. To be honest it couldn't get any better than this. Perfect weather amazing views and great company.  We set up camp and took some pictures/video, then went gathering for fire wood. The wood was soaked but with the skills I have acquired over many months of fire lighting it wouldn't be a problem.

The fire was lite and burning very slow chopping more wood I caught my finger with my recently sharpened axe, needless to say it was quite deep no blood so I stuck the skin back over the cut and continued to chop, after a minute I had blood all over the place its was on my axe and over the wood.

I cleaned it with an antiseptic wipe and stuck a plaster on it, job done.  I went back to the fire and Mr Murphy had let it go out (i never told him to keep it going) needless to say me and Paul chopped and sawed the wood to be fair Dave did fan the fire. We were having a fun time with Dave's efforts.

Dave and Paul went out on the Kayak, with them gone I prepared the tea, it was to be a minty lamb casserole, cooked over the fire with my new dutch oven, I had forgot my peeling knife so had to make do with my bushcraft knife The Native, only thing was it was hard to peel with for me anyways its 4mm thick blade isn't meant for peeling tattys and chopping but nevertheless it did it.

With the lads back just as I was finishing off I helped them out of Kayak and finished off tea, I haven't used a dutch oven before and wasn't prepared how hot the bugger got, burning the meat at the bottom, lesson learned should have it higher from flames, for me the food was spoilt but it filled our belly's.

Most of the night was spent chatting and cutting wood trying to make fire to keep warm, the wood was soaked and the ground was so damp it wouldn't let the fire grow, it was bloody freezing and the dampness was making an uncomfortable  sit around the fire for Izzie (my dog).

I put her coat on her to try and keep her warm but she sat on the blanket shaking in the cold, she had been on the go all day and not rested, cold and weak she collapsed, this caused quite a bit of a shock, I put her on my knee and tried to give her warmth.  I retired early to the tent to get her dry and warm again.

She lay down once dry and curled up in the tent it was still freezing in the big vango and I put my coat over her to get some heat into her.  She rested for a while and then stirred listening to the owls and all the other wild life. Morning came with a nudge from Izzie, it was 4am still dark and even more cold, thinking she may need a wee I took her out but she didn't, I woke Paul half asleep he opened his bivi to see who it was wondering about at 4am.  Sorry Paul.


Back to the tent and coat back over her she would keep still till 7:45am, a much better time to be getting up.  The rain had been lashing down and wasn't easing up, I let her out and she did her thing, made her food and put her in car to keep dry whilst eating.  We began to pack all away leaving the tarps up to cook breakfast, I let the dog wonder about whilst I was packing up after about an hour dog soaked I dried her off and went under tarp to cook bacon sarnie.

So all packed up we left Loch Chon and headed to a campsite in Glencoe called Red Squirrel   We stopped on route for photos, and had a bacon sarnie.  When we arrived at the campsite we were greated by the owner a very nice bloke who chattered for quite some time, we made camp and got the fire going for tonight we were going to have beef and lamb cooked over the fire on my spit. 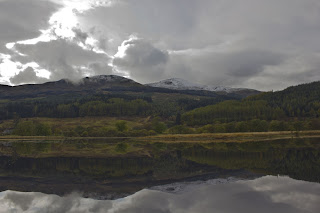 A few drinks whilst mopping the meat and a relax sitting around the fire was bliss again the dog was cold and absoulte knackered she hadnt stopped to sit once all day and eventually collapsed, again I scooped her up and sat her on my knee she soon fell asleep until the meat was ready and it was time to carve up.

I wont go too much into the food but lets just say it was the best lamb I have tasted and all of us enjoyed it a full £13 joint of lamb was consumed along with  most of the £10 silverside beef. We retired early into the tents I had downloaded a film onto my phone and I wanted the dog to rest, so I called it a night, sipping the rest of my brandy I fell asleep tired myself from all the events. I woke up at 1:30am to let dog out as she hadnt had a wee, to end the night, a quick out of the tent toilet stop for both and back in where it was a few degrees warmer, few minutes and I was back to sleep jacket over dog and she too was asleep.
Morning came (this would be my Birthday and my return home) the weather was nice if not a little cloudy, wind had picked up and it was bloody freezing.  Dog fed I put my bacon on and chattered to the lads.

I had a shower before packing up I had been informed that bad weather was on its way, checking my phone it sure was heavy rain.  I was planning to stop there another night and maybe try the dog up a hill for a walk but it was forecast rain from 6pm and that's when I was going to cook my tea. Now I don't mind sitting out storms in tents most of you will have seen my vids and 9 times out of 10 this is my trips but sitting in a tent till morning with dog wasn't my idea of fun, she would be restless and soaked when out for toilet.  So I made the choice that will haunt me for a long time, it was time to call my trip to an end and also let the lads free from me, as I didn't have the cash to put hundreds into fuel to drive to the top and that's what they wanted to do.

It was a hard choice and to be frank has pissed me off no end, the trip cost me a lot of cash which was mainly debt (credit card to the rescue) which I never mind paying off but for this trip will be a nightmare which I won't wake up from.

I have a week coming up and almost planned to revisit Scotland again in November but on my return I have spied the damage and I simply cannot afford to, which has added to my pain.  A trip I will not forget in a hurry but will go down as the worst trip I have been on, not cause of the company or the places I visited not even the weather but because I cannot look after a dog like mine in the outdoors.

It was a very stressing 2 days but I am following my 2 friends continue there trip as I type this in hope that 1 day I shall return to Scotland and enjoy the beautiful landscape it has to offer, it has become my obsession until I get back there, to complete my trip.


WoW over come with a video response from my 2 mates Dave and Paul thanks please like and follow these 2 nice blokes, hoping to get back out with these 2 lads very soon