A Wild Camp At Haweswater 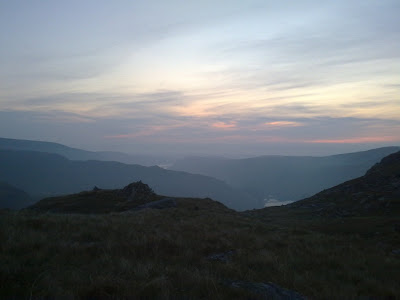 It was Friday 21st of may our first wild camp of the year due to not having winter kit and me breaking the wrist, Joanne the other half was working all day so me being off on the sick had to get things ready well my bag, Jo had already packed hers grrr, anyways got it all packed and I always like to weigh the bags just to get an average on what weight am taking, so out comes the scales middle of bathroom, now these scales are a pain digital ones that do all types of shit but I presses the buttons to get them on kilos and went to run for the bag which I had left in the bedroom now its next door this but I was in a hurry as I lifted very quickly upwards I was nearly knocked to the floor, I stumbled about the bathroom realising I had hit the blood metal door handles "fuck me, that nearly knocked me out." I walked out the bathroom and felt something running down my face, time to panic, what the fuck had I done it was bleeding quite bad worse than when I skidded my head over rocks and gravel when I fell off my bike. I ran into the bathroom for a look see and yep it was blood all over my face, I whipped some bog roll on the top to stop the bleeding which it slowed it right down to a near stop within 2 mins. After an hour it stopped and even the lump had gone down from when I first did it, back to weighing the bags dry weight meaning no water or beer mine was 8.1kgs and jo's was 5.5kgs not bad I thought. We set off later than I had planned nearly 3/4 quarters of an hour late due to me cutting the grass and pissing about with other stuff. I had planned to set of at 6pm be there for 8pm and up on the top for approx 10pm, I made some time up getting the little Yaris upto speed 106mph I was quite proud of the little car and we arrived at Haweswater at about 8:40 and just had a nice steady away walk bit too slow cause we did wanted to be on High Street but enjoying the walk up and not all at the same time, I hadn't done nothing for 5 weeks apart from drink, its surprising how quickly you lose your fitness not working or going to the gym or even getting out walking. So sweating it up it was dark and after 10pm I made the decision to camp at the top of Nan Bield Pass just off the shelter. My new tent the Vango Hurricane 200 up and the food on Brandy in hand there wasn't a breeze, never had me and Joanne been up in the Mountains to find such peace words can't describe it standing there sipping brandy cooking the supper/tea and not a breeze there were a few clouds flowing down High Street which looked very spooky. So instead of jumping in the tent for some........sleep we decided to stop out and just lap it up finishing our drinks it started to become a little cold for t-shirts at about 12am so we went in the tent for some sleep. At about 1am or just after we went off for 1 of or should I say the best sleep I have had on a mountain. I woke just in time for the sunrise popping my camera out to capture it was the icing on the cake. After playing about with my camera we agreed on another hour sleep after all it was still early and we had just went to sleep at 1am. We woke at about 6:30am and I got breakfast on beans and bacon for me and all day breakfast for Joanne, went down well as anyone who has ate on a mountain will know the food is the best when your on there. We set off am not sure what time but just in time for a group of walkers were hot on our tails as we walked up III Bell the sweat yet again pissing out of me, we took a break to look around at the sights and let the storm troopers past lol, all of which was head down arse up and walking at a good old pace, baggers???? anyways we carried on taking it very slow at one time walking up to High Street am sure a big black slug looked back laughing as he slugged his way up there. It was getting really hot with every step I felt like another 1c it climbed, I was taking in loads of water just my hat to stop me getting sun stroke, I knew it was going to be hot but not this hot sun cream was a defo shame we didn't have any. We eventually made it to the trig point on High Street and took a break for some sit down and relax, all to find the sun belting down hotter. 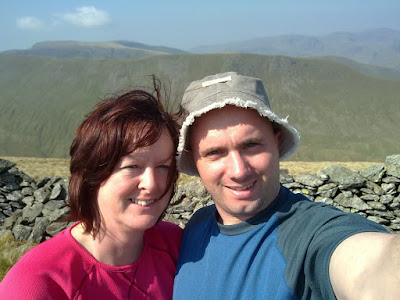 We made our way over towards Rampsgill Head for where we were going to have our dinner a tad early but needed all the same, when we saw the resident Golden Eagle flying above High Street a very nice sight. We made it to Rampsgill Head and sat our sweaty arses down for a bit dinner, chicken casserole all round, another walker passing commented that looks good, sure did I couldn't wait to munch it. After our dinner and a bit look about I took the sensible option and boy was I glad when on the bottom , see we did have planned High Raise and Low Raise but by the time we were finished our dinner it was so hot I could see my arms burning red, we wouldn't have made it, well we would but with burns I suspect Jo was ok it was my pale ass skin that was burning, so instead we descended down from Kidsty Pike where I saw a massive black thing in the distance I pointed out it looked like a black Panther and Jo said that it looked like her black cat Harry, when we got closer it was just 1 big mo fo of a Raven sitting there like the king. As we descended we got to a bit rough stuff call it scrambly bits if you will shit!!!! how the fuck am I going to get down here? Well with my legs stiff as wood I struggled but was making good when we met up with another couple but they were coming up after a bit chat we found out his other half had come off her mountain bike thankfully wearing a helmet which split in the accident she was fine with knocks and cuts I told them about me as you do my scar bigger than yours lol,to which to her fella was quite amazed after 5 weeks I was out on the hills. So on we went our separate ways a bunch of men coming down 1 says as he passes its hot today I have already used up all my water supplies and on he went with a sign on his back coast to coast and him and his mates were in some what of a rush, few minutes later we could hear them shouting in happiness on which I took it because they had made it for the water down at Haweswater Reservoir. As we walked the final little down hill bit our feet sweating and aching my arms burning from the sun we headed for the trees a bit shade and rest before the last walk around the ridge and back to the car. A fill up with the travel tap and off we went back to the car after an amazing but very tiring wild camp the Sun being the spoiler but sun cream is the way forward so take note best to carry it if its going to be hot. You can check MyVideo of the wild camp and walk follow the link.