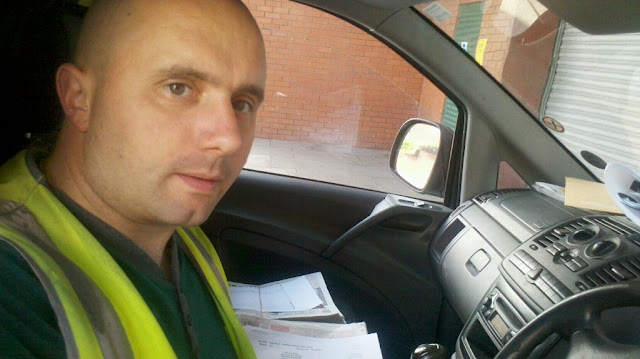 Thought the above picture was a good one for this post.  As soom of you maybe aware just recently at work all van drivers were called into a meeting, we were told in so many words that the end of July 2011 we were all to be laid off and offered the chance to either re apply for a post at the firm or go self employed.

A shock I bet your thinking not really as when I was told a meeting was to be held I knew what they were going to say, pissed off would be more appropriate.  So 33 drivers have been put in the same boat as me all have the same feelings but after you calm down and have a little think you come up with all kinds of shit.

1) My first initial thoughts were to go self employed after all I would be my own boss and with my own van and be able to take on more work and make more cash, shit I could even take the dog with me so given her a better life instead of being stuck in the house  while I was at work, I had it all worked out things were looking up.

2)  My 2nd choice was to apply for the role, there is to be 4 jobs getting kept on, I had been told it would involve more hours and obviously more cash.

So after about a minute of thinking I went with the self employed, doing my research on this it started looking more like a nightmare.  So the pressure now is on or well it was up until I slowed my thoughts and found out the most important thing how much cash will I be getting, this was the decider on what to do and is a very much laughing matter.

They want us well me to do the same delivery round as I do now for approx the same amount of cash as I get now????? confused yes well it works out like this when you add my regular overtime, to them they would be giving me roughly an extra £200 a month for same job but because I get overtime every month it works out the same? madness so why on earth would I go self employed and get the same amount of cash I make now to do the same job but have all the worries of running costs of van sorting my own tax etc have no holidays and not get paid double time for bank holidays? so after that a quick decision of fuck them and I am going to apply along with most of the drivers for 1 of the 4 posts which will remain in the company, which if I did get it then well I shall be working more hours which I want and making more cash and the chance of doing overtime and still get my 5 weeks holiday paid.

So fingers crossed and I shall keep you all updated, however if all goes tits up I shall take advantage of the dole for a short period and get some wild camps in win win situation well apart from having to sell my motor :-( but getting me out of the debt I'm in for it:-)  so chin up and smile cause it will all come out in the wash.
Posted by Paul aka Themuss at 11:45