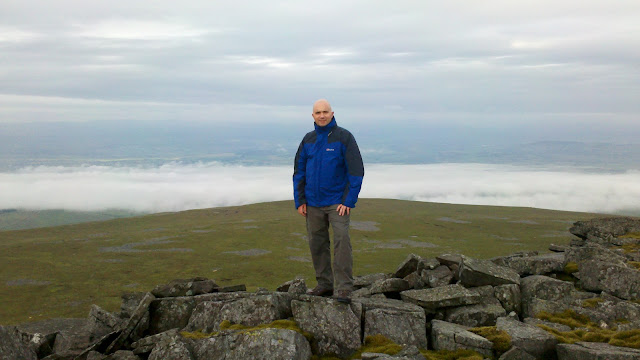 So as the title says me and Dave Murphy planned a wild camp on the summit of Cross Fell for 1 night on Saturday 18th June 2011.

As usual I checked the weather every day the week previous to see what was happening, not by anyones surprise it was nice all week up until the weekend, forecast rain and fog.

Gets a bit long in the tooth when every fucking time I walk up a hill I get no views but its still better than being stuck in the house getting lashed and even more unfit.

So off we went after finishing work a tad late just after 3pm we set off in hope that the cloud "might" lift I didn't think that really I fucking knew it wouldn't, or so I thought.  We got there and parked at a little village called Kirkland, anyone heading up there is a nice little parking spot right at the end of the road.

We started our hike up through the farmers fields full of sheep shit treading as careful as you could, I mean has this farmer not heard of dog poo bags or (shit bags) as I call them.  Anyways as we made our way up I set my social hiking beacon and tweeted.  The farmer was spinning about on his quad with dog chilling next to him he made his way over to us, my initial thoughts were he going to be a twat but much to my surprise he asked if we were heading over to Greg's hut, I informed him of our plans and a little chat and walked away thinking what a nice chap so anyone walking in that area if you see him cruising around on his quad give him a wave and a bit chin wag.

So a long slog up getting wet with drizzle and sweat we slogged it out resting alot and having some really random conversations which I won't go into too rude even for this site ;-).

As we walked up the cloud was low and it wasn't long before we were in the mix with it and the drizzle got a little heavier, near the top you could feel the 10mph winds cooling us down and coats were soon on and zipped up, I recorded a wind chill of about 4c it was cold enough.

We arrived at the top after a good few hours and 4 miles of up hill struggle to see the wind shelter and trig some pictures were taken and then a look around near the trig for a bit flat grass, we found a nice sweet flat spot but I bent 2-3 of my alpkit y beam pegs with the rocks under the grass grrrr.

With camp made and a quick sip of Brandy I had a wander over to the shelter to get phone signal to phone the other half and finish my tweets off, this seemed easy enough as we were only about 300yards from the trig if that, lol but taking what seemed the same route back I over shot the camp and past Dave and the 2 tents after a couple of mins walk I thought best give Dave a shout as I couldn't see a bastard thing in front of me, after a couple of shouts and a small panic, I turned 180 and thought best re trace my steps about half way back I gave Dave another shout this time I heard his voice to my left "few." off I walked back to camp, I could only think of being lost and not being able to get my booze.

So sitting in my tent out the way of the rain sipping Brandy and chatting to Dave we past a good few hours, till about 12am Dave was finished with his booze and asked if I would care for some vodka (silly question) so I sipped that and turned in for the night the wind never got up stayed at 10mph max gust and I slept like a baby.

Alarm went off at 5am and I checked the weather yip same old shit so I lay back down for 5 mins and woke up at 6:20am "shit am late" jumped up looked out and I could see Great Dun Fell and a cloud inversion with a few squawk's I jumped out and Dave running 1 way and me the other to see the views of our first cloud inversion.

A few seconds of jumping out the tent like a  mad man I realised I didn't have a camera with me as I took the battery out to charge it up and well it stopped there out of sight out of mind.  Fuck was I pissed off, so armed with only my phone I snapped away and did a little video (vga quality).  It was a beautiful sight and we watched in amazement as the cloud all of a sudden just started to lift there was no wind just a breeze but it went up pretty quick, a sight I won't forget in a hurry majestic and it just made the wild camp 100% more better icing on the cake so to speak.