I had planned a wild camp with Dave and Chris on the summit of Great End but Chris pulled out due to having to sort out his wedding (congrats Chris by the way).  So as it was going to be a massive push for me to get over to the western side of the lakes Dave suggested Howgills area, we were going to do The Calf but last minute Dave changed it yet again to Wild Boar Fell, so back to my computer I went for the 3rd time and started planning parking area and route up.

It didn't take long and I found a sweet little spot just over a bridge mind you if you park in the same place watch your car doesn't bottom out on them rocks bloody shit myself when I drove on to it and bang!! ouch I thought as hope I haven't hit the sump, expecting oil pissing out all over a quick check and it had only hit the arm underneath, thank fuck.

We started our accent a nice slow pace noting that we were defo not going to get any views as I had checked the met office and it was correct, so with that in mind we took a nice stroll up, as long as it was dry that was the main thing.

I had packed my Alpkit pipedream 800 and Rab Down Jacket as when I went to work on the morning it was colder than I expected, the day before had hit 25c.

When we reached the top and checked around for a good place to camp we set up our tents on the edge a place noted on the map as The Nab.  Would have been nice to see around us but the fog was thick and it was in to stay.

After a little time sorting our gear and having a quick sip of Brandy we thought it would be best to have a little look for the trig point only about a half a mile away so off we went drink in hand.  I have recently been trying out a web site called Social Hiking which by using Twitter you can send up beacons and thus puts it on a map and if you Tweet and leave #sh it logs that on the map too also you can put pics etc. so I did this and it worked quite well, its live as you do it so if any friends want to know where and what you doing they can track your progress as you do it, neat idea.

On our way back to the tents I kept trying my new toy Kestrel 3000, which got the max gust at just over 20mph and the wind chill of that gust at about -1.6c to say the least it was frigging cold, with the winds picking up and the temp. going down hill I thought I had made the right choice to bring my winter bag and jacket I was snug as a bug standing outside till well after 12am.

We chattered till well after 12am finishing off the Brandy and Dave with his Rum, we headed back in to our shelters and one of us to the best ever sleep on a wild camp (or in bed for that matter with my bloody dog and its crazy belly flops on ya at 4am).  I literally went to sleep soon as I got in the sleeping bag and it actually took me 15mins to become awake enough to turn my annoying alarm clock that wakes me usually in 1 second. 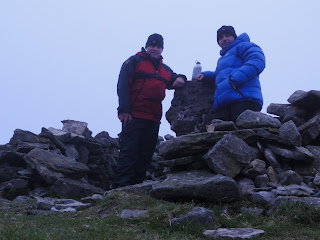 As we got out of our tent Dave told me that yet again he had been awake all night in his tent, so I found this a perfect opportunity to tell him about my amazing sleep even though it had only been for 4 hours, i have never experienced anything like it before.We headed down pretty much straight away and taking video and pictures of the sights as we lowered out of the cloud, mind I must admit it did lift a couple of times so we could see the floor from our camp site.  Not the best of views but good enough as I had thought when going up that we would see nothing and basically be lucky to see each other up there. 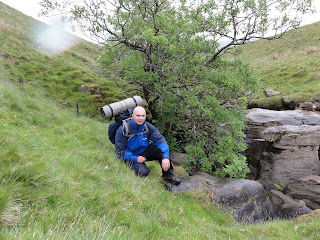 It had been a well earned trip from work and even though we got no views and it was thick cloud and bloody freezing we still had a blast, a good laugh and banter with a bit drink on top of a hill is just pure bliss to me and well I just can't wait to get out again.