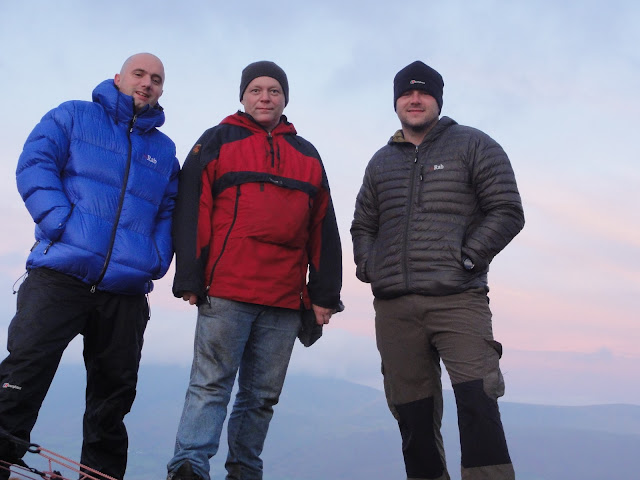 This trip for me and Dave Murphy was on the cards from having to ditch the trip when my hurricane tent broke in near 80mph winds, not one for being beat the sooner I got back up there and spent my night under the stars the better.  It may have won round one but round two was mine with a splendid wild camp with two very good mates of mine Mr Sumner and Mr Murphy (crazy horse).

So Chris had been to Florida for 2 weeks and was on about going to the Lakes for a night out when he came back before he goes back on the rigs for 3 weeks.  I was desperate to try my new tent out and I know Chris was too, so planning was started, I tried for 2 days off work but was refused, so not to be beaten again I would plan this trip around work, Chris was getting back on Friday morning very early on so this was the day.

It was going to be a push as I don't finish till 6:30pm but foot down and me an Dave could be up at the meeting place for about 9pm, we got there before but Chris never been there before wasn't quite at the parking spot we agreed to meet lol but few phone calls later he found us bit chatter and off we went slow pace and lots of catch up talk was had.

The walk up with the satmap was made very easy following my last foot steps and we made good progress even with the slow pace, we reached the summit in pitch black condtions but the weather was sweet in fact Chris walked up with just t shirt on.  Reaching the summit the winds were there not strong but strong enough to blow our tents about but with the Hilleberg Allak it was made so easy even in max gusts of 30mph.  Dave grabbed the very summit if you have been on this hill you will know it raises about a foot to the summit enough for a tent to be pitched and Dave the summiteer (lol) claimed his might spot lol and left me and Chris a foot down from him lol. 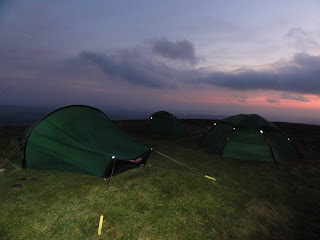 Me and Chris inspecting each others tents as we both had brand new Hillebergs me with the Allak and Chris with the Soulo both tents are very well made and I personally love them both mine the Allak is a 2 person tent and Chris is the 1 man tent.  For winter camping or in bad weather these tents are worth considering.


We spoke to well into the night having a real good laugh as usual, the views of the towns and villages below were very nice from up there being free from clag was nice.  I awoke at 6:30am still free from rain and clag we watch the sunrise took some pics and video and then realised the time.

So with a oooh shit we have to go, I was driving and needed to be back for 10:30 we didn't leave the summit till about 8:20am I can say we were at the bottom at 8:30 something just over 10mins to get off a bit of running and laughs as Chris was filming me being daft running down skipping and jumping and in fact fell over Dave following behind not zipped his camera pouch up proper and low and behold it had fell out.

Chris and Dave dropped there bags and ran back up to see if they could find it returning without it, always something bad happens it was my satmap last time so lets hope someone picks it up as it has plenty of daveswildcamping.com plugs on it. 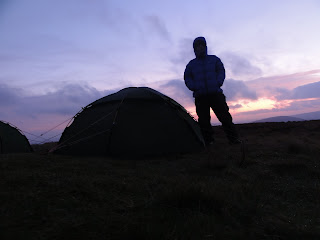 We shuck hands and went our separate ways racing back on the A66 me trying to pass Chris and him pulling away again games and fun again lol and a bank came up with wind behind me I was off past Chris at top speed in fact my little Aygo went off the clock.  Needless to say we got home very quickly and I was home for 10:35am.


Again with these lads a fantastic time was had and I can't wait to get away again.  I would like to thank Look What We Found as they gave me 4 meals to try out and on this trip I had the fellside beef casserole which I have to say was very nice and is now 1 of my favs from there selection.  My video you can watch is below and a very kind YouTuber Laura let me use her song which she wrote, played and sang herself massive respect to her and a big thanks check out her you tube channel out Here